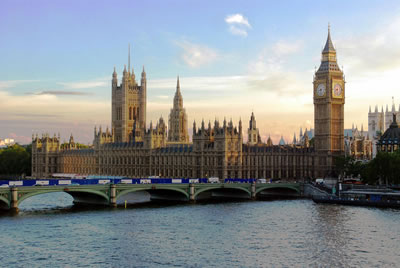 Less than a mile away from us and a pleasant 20-minute walk is the world-famous Palace of Westminster, or Houses of Parliament.

The Palace of Westminster serves as the meeting place for both the House of Commons and the House of Lords, the two houses of the Parliament of the United Kingdom. Commonly known as the Houses of Parliament after its occupants, the Palace lies on the north bank of the River Thames in the City of Westminster, in central London, England.

There are a number of ways UK residents and overseas visitors can visit UK Parliament including taking tours and watching debates and committees. UK Parliament (better known as the Houses of Parliament or the Palace of Westminster) includes the House of Commons, House of Lords and Westminster Hall. There are details about visiting on the UK Parliament website here.

The history of the Houses of Parliament spans over 900 years from the Anglo-Saxons to the present. Today, the Palace of Westminster covers eight acres (3.24 hectares). It contains around 1,100 rooms, 100 staircases and 3 miles of passageways. From the Victoria Tower at the south end to the Clock Tower at the north, the building is nearly 300 metres long. The Palace also contains state apartments for the presiding officers of the two houses.

The official residence of the Speaker stands at the northern end of the building. There are four acres of gardens and green lawns surrounding the Palace. Victoria Tower Gardens is open as a public park along the side of the river south of the Palace. College Green, opposite the House of Lords, is a small triangular green commonly used for television interviews

House of Commons – The UK public elects 650 Members of Parliament (MPs) to represent their interests and concerns in the House of Commons. MPs consider and propose new laws, and can scrutinise government policies by asking ministers questions about current issues either in the Commons Chamber or in Committees.

The name Big Ben is often used to describe the tower, the clock and the bell but the name was first given to the Great Bell which was first struck on the 7 September 1859.

Westminster Hall is the oldest building on the Parliamentary estate. It has played a central role in 900 years of British history, with the major institutions of the British state having grown up directly around it.

St Stephen’s Chapel is the forgotten heart of the Palace of Westminster. For seven centuries St Stephen’s was at the centre of the political and religious life of the nation, and its influence is still detected today.

More about Pimlico Osteopaths and the services we provide

Find out about our favourite local market – Tachbrook Street Market.

This website uses cookies to improve your experience while you navigate through the website. Out of these, the cookies that are categorized as necessary are stored on your browser as they are essential for the working of basic functionalities of the website. We also use third-party cookies that help us analyze and understand how you use this website. These cookies will be stored in your browser only with your consent. You also have the option to opt-out of these cookies. But opting out of some of these cookies may affect your browsing experience.
Necessary Always Enabled
Necessary cookies are absolutely essential for the website to function properly. This category only includes cookies that ensures basic functionalities and security features of the website. These cookies do not store any personal information.
Non-necessary
Any cookies that may not be particularly necessary for the website to function and is used specifically to collect user personal data via analytics, ads, other embedded contents are termed as non-necessary cookies. It is mandatory to procure user consent prior to running these cookies on your website.
SAVE & ACCEPT